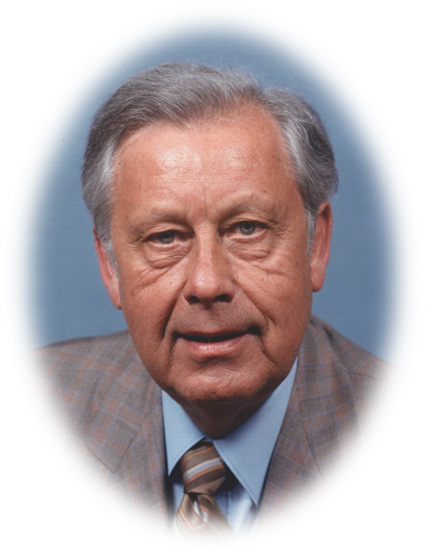 Joe was a loving husband, father, son, brother, grandfather and great grandfather. A native of Hall County (which he truly loved), he graduated from Lyman Hall High School in 1940 and married the former Helen Thrasher Wood in 1941. He was privileged to serve this great nation during World War II. Joe was stationed in the Philippines and was honorable discharged in 1946. It was during his army service to our country that he developed a strong respect and dedication for the military and veterans that became his true calling.

Joe was a life time member of the American Legion, D.A.V. and Veterans of Foreign Wars (VFW). He served as commander for the Georgia VFW in 1954 and became a member of the National VFW Political Action Committee in 1956. Joe met with every President of the United States from Dwight Eisenhower through George W. Bush to help improve the benefits provided to our active duty military and veterans.

Joe was elected to the Georgia House of Representatives in 1965 and served 23 consecutive years representing the people of Hall, Forsyth and Dawson Counties. He was chairman of the Defense and Veterans Affair Committee for many years and the legislature recognized his commitment to veterans by naming a 150 bed nursing home for veterans the ""Joe T. Wood Building"". Joe was a member of the Appropriations Committee for 18 years and worked diligently to secure funding for Gainesville College, Lanier Tech and I-985. After his retirement from the General Assembly, he served for 20 years as a legislative consultant to the Medical Association of Georgia.

A well respected businessman, Joe started in the insurance business in 1951 joining Paul Turner and formed Turner and Wood Insurance Agency which was successor of the Whitworth Agency that started in Lula, GA in 1905. Joined by his partners, Roy Turner and Harold Smith, the Turner, Wood & Smith Insurance Agency is recognized as one of the largest and most successful insurance agencies in the State of Georgia. Joe served as President and Chairman until 2004 but remained an employee until his death.

Joe has been recognized by numerous organizations for his work in business and the legislature. He served his community as a past President of the Hall County Community Chest (United Way), Salvation Army Board, American Cancer Society, trustee of Gainesville College, member of Chattahoochee Country Club and Gridiron Secret Society. Joe served for many years as a trustee of Truett McConnell University and for his long tenure and support, the school honored Joe by naming the board room after him. Joe was a member of Chicopee Baptist Church for over 75 years and served as Chairman of the Board of Deacons, and on the Finance Committee for many years.
Joe is proceeded in death by his parents, his wife of 56 years, Helen and sister in law Vera Sheridan. He is survived by his son and daughter-in-law, Joe & Cathy Wood, Jr., grandchildren, Marinel Wood, Trey (Morgan) Wood, Brandon (Christy) Young, Tyler Young, brother and sister-in-law, Willard and Margaret Wood and special friend Judy Anderson. He has 5 great grand- children, Davis, Warren, Nora, Bryant and Max, along with several nieces and nephews.
The family would like to thank the wonderful ladies of Helping Hands Home Care – Jen, Lisa, Gabriel, Keisha, Natalie, Gwen, Lynn, Taylor and Dena for their compassion, friendship and assistance
Funeral services will be held at 11 a.m. Tuesday at Chicopee Baptist Church with Reverend Phill Carpenter and Reverend Clyde Self and Jerry Jackson. Visitation will be held at Memorial Park North Funeral Home, 989 Riverside Drive, Gainesville from 5-8 p.m. on Monday, April 29. Internment will follow at Alta Vista Cemetery. In lieu of flowers, please consider donations to Eagle Ranch, Truett McConnell University or Chicopee Baptist Church.