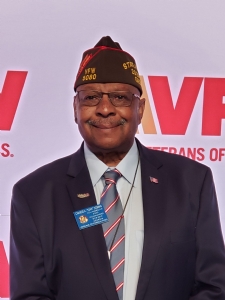 Charles A. (Tony) Dobbins was elected and installed as the Veterans of Foreign Wars Department of Georgia State Commander at the 76th Annual Convention held in Macon, Georgia, June 14-17, 2018. Commander Dobbins spent 20 plus years on active duty in the United States Army from November 1974 to May 1995. He has had several stateside and overseas assignments with his career ending at Fort McPherson, Georgia as the Directorate of Information Management Sergeant Major. Commander Dobbins has received numerous awards including the Army Achievement Medal, Army Commendation Medal, Meritorious Service Medal with two Oak Leaf Clusters and the Legion of Merit. Commander Dobbins joined the Veterans of Foreign Wars in 1997 with his eligibility coming from his Korean Defense Service from October 1986 through January 1990. Commander Dobbins has held numerous assignments at the post, district, state and national levels. He has been a three-time member of the Post All American Team as Commander of Post 5080 Lake City and a Co-Captain of the District All American Team as Commander of the 3rd District, Metro Atlanta. Commander Dobbins has Associate Degrees in Electronics and General Education from DeKalb Community College (Perimeter College now) and a Certificate in Information Technology from Clayton State University. State Commander Dobbins is a Gold Legacy Life member, Life Member of the VFW National Home for Children, Life Member of the Disabled American Veterans and member of the American Legion. State Commander Dobbins is married to Patricia Dobbins and they reside in Stockbridge, Georgia.