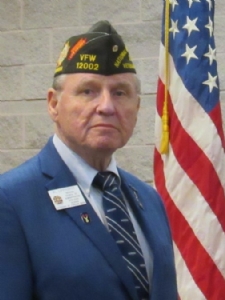 Alfred J. Lipphardt was elected to a four-year term on the VFW’s National Council of Administration on July 25, 2018, at the 119th VFW National Convention in Kansas City, Mo., representing the Department of Georgia.

Al served in the United States Army from 1965 to 1979, earning his VFW eligibility by serving in Vietnam from 1967 to 1968, and from 1970 to 1971. In recognition of his service, he received the Bronze Star with Valor device, Bronze Star Medal for Meritorious Service, Purple Heart Medal, Army Commendation Medal for Achievement, Good Conduct Medal, and the National Defense Service Medal, Combat Infantryman’s Badge and others.

He joined the VFW in 2002 at Post 12002 in Alpharetta, Ga., (now located in North Fulton, Ga.) where he maintains his Gold Legacy Life membership. He has served in elected and appointed positions at the Post, District and Department Levels, culminating with his election as Department Commander in 2014, in which he achieved Triple Crown All-American Commander status. On the national level, he has served on the Legislative Committee, and on the National Security and Foreign Affairs Committee.

Al is retired. He received his Bachelor of Science degree in Business Administration, from Pacific Western University in 1990.
He is also a life member of the Disabled American Veterans, Military Order of the Purple Heart, the 196th Light Infantry Brigade Association and an American Legion member.

Al and his wife, Carol are life members of the Veterans of Foreign Wars National Home For Children and they reside in Stone Mountain, Ga